Our trip to Tioman had been cancelled a few times. Once due to Daren cancelling it, another due to not being able to get ferry tickets as it was a local bank holiday weekend, then Katie had to go to Houston. We finally got out there this weekend although we still had problems.

We made our way over to Mersing on Friday night. As Katie had been working that day, we didn’t leave until 6pm, arriving just after 9pm. We parked up, found the Embassy Hotel (more like a hostel really), went out and got some food, and headed back to the hotel. The room itself was basic to say the least, but at RM55 (£8.64) for 1 night for a twin room with air conditioning, you wouldn’t expect anything more. It’s close enough to get the early morning ferry, and it did the job of letting us get some sleep.

Up at 6am the next morning to pack and get to the ferry terminal in plenty of time. Of course, this is Malaysia, so it would have been foolish to expect the boat to leave on time. We left the car in the grounds of the “mini-stadium”, then walked over to get our ticket. This is where our problems started. Daren had given us details of the boat company, the counter to get the ticket from, and what time the boat left. He hadn’t told us which stop to get off at, or even the name of the accommodation (which would have told us the name of the stop), or what time our return trip would be. The latter was fine; the woman at the counter found the booking and scribbled the return time on our “one-way” ticket (note to self: bring a thick black pen next time, but only pay for one way crossing). We sat down for a few minutes, then headed to the ferry – the guy collecting the tickets asked us which stop we were getting off, we said we didn’t know, then he said that this boat only went up to Tekek (the “main” village on the island). I asked if this was the 7:30 boat, and he said yes, so we got on.

The ferry itself was not too bad, although the air con was a little chilly. They played Kayangan, some romantic poor-girl-meets-rich-(prince?)-guy Malaysian film set in KL and elsewhere in Malaysia. After 2 hours or so, we arrived at Genting on Tioman Island. I stuck my head outside to see if Daren was waiting on the jetty, but no luck, so we stayed on the ferry and carried on to Paya; again, Daren was not waiting for us here. Now, we thought that Tekek was the last stop, and being the main place on the island, would be a logical stop for us to get off at, in the hope of finding Daren. We got off, we wandered around, but couldn’t find him. It seems that wherever he was didn’t have a phone signal either – we tried and tried, but unless he found a way to contact us, we weren’t sure where to go (back to the lack of information about resort and accommodation), leaving us no option but ti sit and wait.

After 45 minutes or so, we decided to ring Katie’s colleague who’d been learning to dive with Daren a few months ago. He thought that Daren might be in Salang, further to the north. As I was 90% sure that Daren had mentioned something about diving from the north of the island, this made sense, so we decided to take a water taxi and head there. Typically, as we were arranging the boat, Daren rang to ask where we were and suggested we get a water taxi to head to Salang.

The 15 minute taxi ride cost as much as the 2 hour ferry ride but was quite exciting. After we arrived in Salang, the rest of the weekend went much smoother. We did 3 dives on the Saturday and 2 on the Sunday. On all the dives we saw various fishes and other marine life, even when were in shallow (5 metres) waters doing the skill-based tasks of the course; stay still for long enough and the fish come to you! We didn’t see any black-tipped reef sharks, but we did see a turtle going about it’s business and that was very exciting. We also saw lots of “Nemos” (clown fish), sea cucumbers, devil stonefish, saergent fish, ox-eye fish, lots of coral, spiky sea urchins and anemones.

We’re now certified PADI Open Water Divers and we’re planning to have a holiday in September or October where we can make use of this! More images to follow. 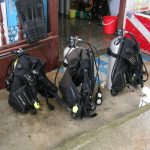 The BCDs being lined up ready to gear up 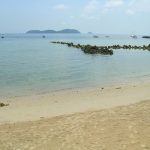 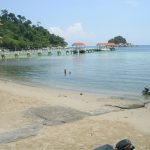 Looking towards the jetty and Soyak Island 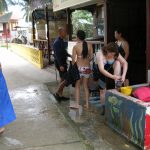 Getting suited up to go on another dive 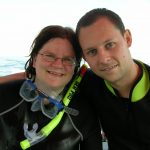 Just after our 2nd boat dive of the weekend 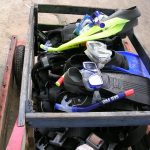 Gary Jones is a UK-based WordPress Engineer, code consultant, and father of extremely premature twins. Driven by a passion for excellence, he creates elegant WordPress plugins and theme solutions for clients, and provides services, including code audits, for other designers and developers. Gary is a key contributor to the Genesis Framework and has contributed to all except one major branch of WordPress Core since 3.3. He has contributed to many open source projects in the community, and is a co-host on the UK Genesis podcast. A former teacher in schools and prisons, Gary's goal is to educate WordPress professionals on how they can improve their code. His motto is knowledge is power.