Whilst doing an interview for my family tree research I was told about a relative of mine who was murdered in the 1950s or 1960s. This page documents what I’ve found, and have been told, about Marian Hartley, a 15-year-old schoolgirl who was killed by Joseph Kiely in Walthamstow in 1966.

If you’ve got anything to add, or disagree with what I’ve included below, please leave a comment at the bottom, after the tabbed content. 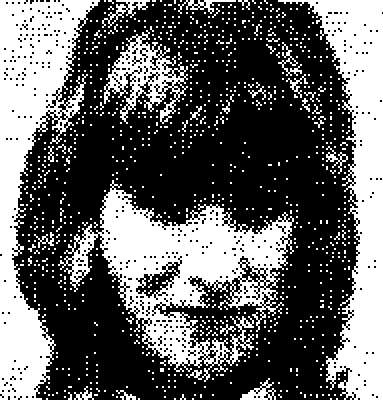 Marian Hartley was born 16th February 1951 at North Middlesex Hospital, Pymmes Park, Middlesex and was the daughter of Eric and Maud (née Faulkner) Hartley. She had three siblings: Barbara, Derek and Sandra. Had she been alive today, she would be my first cousin twice removed – she was my nan’s cousin, Marian’s grandmother is my great great grandmother.

Having died in the early hours of Sunday morning, 24th July 1966, Marian’s death was reported on the front page of the Daily Mirror national newspaper on Monday, 25th July 1966:

Hunt in forest after girl, 15, is killed

Squads of police searched the fringe of a forest yesterday after a blonde schoolgirl has been attacked and killed.
The schoolgirl, 15-year-old Marion Hartley was attacked as she walked home from a dance at Chingford, Essex, after midnight.
Sounds of a struggle were heard by some of her neighbours in Forest Glade – a dim lit road with houses on one side and the edge of Epping Forest on the other.

Soon afterwards, 250 police with dogs began searching the forest.
Marion, a fourth-form pupil at Walthamstow High School was found dead in a bramble-patch, less than 100 yards from her home.
The police kept searching. Several men seen in the area were questioned.
As daybreak came, anglers began arriving to fish in a pond near where the dead girl had been found. They were turned away.
After five hours, the search was called off.
Last night, a 20-year-old man was charged with murder.
He will appear in court at Walthamstow today.

The article doesn’t mention the cause of her death, although my initial source said that she may have been strangled and that the person charged with murder may have been her boyfriend at the time. They also said they thought she had just got off a bus, but that seems to contradict the article.

A follow-up article was given on page 6 of the Daily Mirror the next day:

A man accused of murdering 15-year-old schoolgirl Marion Hartley was said yesterday to have told the police: “I was very drunk and didn’t know what I was doing.”
The man, 20-year-old Joseph Kiely, of no fixed address, is alleged to have killed Marion early on Sunday near her home in Forest Glade, Chingford, Essex – at the end of Epping Forest.
Yesterday, Detective Superintendent Jim Graney told the magistrates at Stratford, East London, that he spoke to Kiely on Sunday evening at a police station.
Superintendent Graney said he told Kiely:
“As a result of a post mortem examination of Marion Hartley, whom you took into the forest last night, I have ascertained that she died of manual strangulation and suffocation.”
Kiely, who comes from Dublin, was remanded in custody for eight days. He was allowed to see his two sisters before leaving the court building.

The following information has been kindly provided by Lynne Kiff:

I was 11 when Marion died. Her father, who I only knew as Mr Hartley, had a shop in either Orford Road, Walthamstow or one of the adjoining roads. His shop, if my memory serves me well, was an electrical shop that sold televisions and radios. I seem to remember a white sign over the shop that said Hartleys and I think Mr Hartley did repairs. He was (to me) a tall thin man with white hair. I don’t remember seeing his wife. My mum was quite friendly with the family and was often in the shop.

All I remember from the time of her death were the conversations in our house at the time. It was the most shocking thing and actually is different from the above news story. Mum said that she had gone to a school dance and that there had been a bit of an argument between Marion and her parents, they had wanted to pick her up after the dance and she had showed off, saying that she was old enough to come home by herself, they had in the end relented.

The other thing where it differs is that my parents were saying she had been found hanged from a tree.
Quite obviously her parents were devastated. I particularly remember this time because a short time afterwards Mr Hartley gave my mum Marion’s clothes, school blazer etc. I refused point blank to wear them and my mum eventually threw them away – I remember the shop being closed for a while but I have the impression that he then reopened and was working in there but I don’t remember how long for.

Lynne goes on to say:

I’m not sure if she was actually hanging or ‘suspended’, sort of hooked into the tree, if you can understand that, but as I said, it was conversations around the event so may be misleading, but it still is something my mum was always adamant about.

I do have a little more background information for you, although sadly not in relation to her death. We live in Chingford now, my husband has always lived in Chingford. He had a paper round with Marian, together they were employed by Bill Lands newsagents in Hatch Lane, Chingford. My husband was around 14yrs old at the time and used to be at the house in Forest Glade often with Marion and fondly remembers picking gooseberries with her in the garden and ‘hanging out’ together with her at Highams Park boating lake. He said her character was very bubbly and she was always laughing and happily playing around and that her character was very much of a tomboy, and he remembers she usually wore shorts and t-shirts in the summer.

Laura has said that:

There’s an article by Matthew Spicer regarding the murder of Marian Hartley. A photocopy of it was given to my aunt to read because the murderer Joseph Kiely, is from Tipperary Town. He lived across the road from her when they were young. Its 3 pages long with pictures of the incident – her jacket, shoes, Joseph and where it happened etc. There’s also a picture of a letter she wrote to the Walthamstow and Waltham Forest Guardian on the Saturday before it happened. They received it on the Monday morning the story broke. She was collecting Green Shield Stamps to buy a minibus for her school. She hoped the newspaper would help by promoting it.

I’ve since got a copy of the magazine Laura refers to, so will uploads more details here when possible. I’ve spoken to Matthew Spicer, and he confirms that the images and details come from the open court report.

Joseph A. Kiely apparently grew up in Tipperary, but later had moved to Dublin, before coming over to the UK in early July 1966. 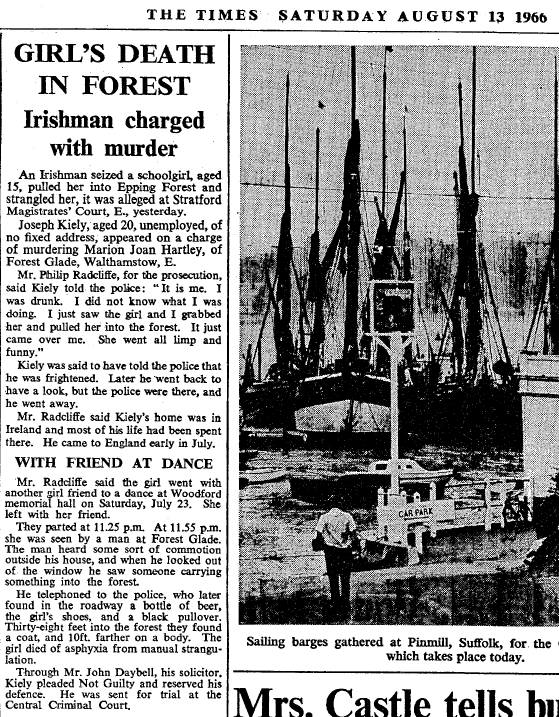 The transcription from the article above, which appeared on page 8 of The Times on Saturday August 13, 1966:

An Irishman seized a schoolgirl, aged 15, pulled her into Epping Forest and strangled her, it was alleged at Stratford Magistrates Court, E., yesterday.
Joseph Kiely, aged 20, unemployed, of no fixed address, appeared on a charge of murdering Marion Joan Hartley, of Forest Glade, Walthamstow, E.
Mr. Philip Radcliffe, for the prosecution, said Kiely told the police: “It is me. I was drunk. I did not know what I was doing. I just saw the girl and I grabbed her and pulled her into the forest. It just came over me. She went all limp and funny.”
Kiely was said to have told the police that he was frightened. Later he went back to have a look, but the police were there, and he went away.
Mr. Radcliffe said Kiely’s home was in Ireland and most of his life had been spent there. He came to England early in July.

With Friend At Dance

Mr. Radcliffe said the girl went with another girl friend to a dance at Woodford memorial hall on Saturday, July 23. She left with her friend.
They parted at 11.25 p.m. At 11.55 p.m. she was seen by a man at Forest Glade. The man heard some sort of commotion outside his house and when he looked out of the window he saw someone carrying something into the forest.
He telephoned to the police, who later found in the roadway a bottle of beer, the girl’s shoes, and a black pullover. Thirty-eight feet into the forest they found a coat, and 10ft. farther on a body. The girl died of asphyxia from manual strangulation.
Through Mr. John Daybell, his solicitor, Kiely pleaded Not Guilty and reserved his defence. He was sent for trial at the Central Criminal Court.

Six weeks later, on Tuesday 27th September 1966, another article appeared in The Times on page 9: 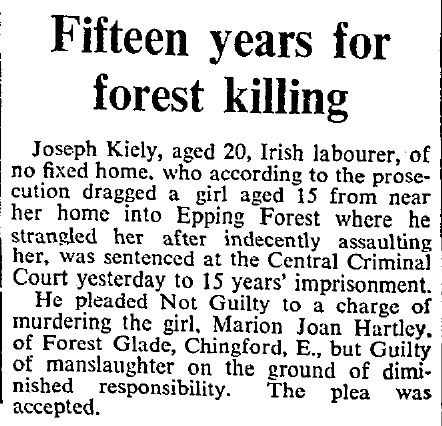 Joseph Kiely, aged 20, Irish labourer, of no fixed home, who according to the prosecution dragged a girl aged 15 from near her home into Epping Forest where he strangled her after indecently assaulting her, was sentenced at the Central Criminal Court yesterday to 15 years’ imprisonment.
He pleaded Not Guilt to a charge of murdering the girl, Marion Joan Hartley, of Forest Glade, Chingford, E., but Guilty of manslaughter on the ground of diminished responsibility. The plea was accepted.

The National Archives appear to have two records for Kiely – one record covering the dismissed charge of murder, and one closed record covering the eventual charge of manslaughter. I’ve asked for an estimated cost to send me all of the first record, and put in a Freedom of Information request on the second one, although I’m not expecting the record to be opened.

Till Death Do Us Part Reference

Someone left an anonymous comment that said that the killing was mentioned in Series 1 Episode 6 of Till Death Us Do Part. This was a British comedy that started in the 1960s.

The episode got wiped by the BBC as per their policy at the time, but there is an audio-only version available somewhere, though I don’t think Series 1 Episode 6 is a correct reference.

Unfortunately, this episode was supposedly broadcast on the 18th July 1966, several days before Marian’s death. No other murders are of young females are known to have occurred during this time, so either the recorded date of broadcast is wrong, or it does indeed reference Marian’s death.

This site uses Akismet to reduce spam. Learn how your comment data is processed.