I don’t really know too much about my Grandad, except that he died 20 years ago today.

Arthur James Thomas Buchanan HARRIS, known as George after his father, was born in Temperence Street, St. Albans, Hertfordshire, on 23rd February 1912. In WWII, he was in the Royal Army Service Corp, 13th Corp Leaping Gazelle, Water and Breakdown Transport (driving the big Mac lorries). He was awarded the Oak Leaf and Bar, and Mentioned in Dispatches. He later worked at Horace Slade & Co. Ltd. He had 5 brothers and sisters. In July 1952, he married my Nan, June DUNHAM in St. Albans.

When I have more time I want to see what military records hold about him. I know he was posted to Africa and the phrase Desert Rats has been mentioned a few times, but other than that I don’t know any more.

As he died when I was 8, I didn’t get to know him much. All I remember was that he the strong and silent type. People who know me and knew him have said how like I him I am at times. That’s fine with me. If anyone did know him, then feel free to get in touc.

I posted a poem that I wrote ten years ago of how I was feeling at the funeral ten years before that. I copy it in full below: 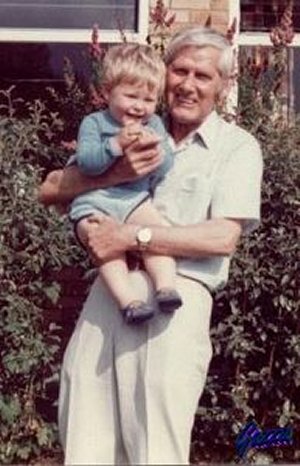 I lost a loved one almost ten years to the day.
I remember some of the memories, others have faded away.
What tears me up the most, and to you maybe the same,
Is that never again will we here, that treasured voice again.

It was my Grandfather who left us, I remember the day I was told.
I was sitting at home, with my mum, I was only nine years old.
Now something like that for a nine year old, is such a weird thing,
You know that something is wrong, because everyone around you is crying.

It wasn’t like that for me though, I had only my mum for support,
It didn’t sink in at first, but later when the evening came, she appeared very distraught,
She told me straight and didn’t hold back, and gave me a hug to ease our pains,
I cried like I had never cried before, aching inside, becoming a man in one day.

I was allowed to the funeral, for which now I shall always be grateful,
And it was there that I knew I was a child, for when it came to say the Lords prayer,
I spoke no words. I said my own words of love, to the man I take after,
As his coffin was taken away to a place behind the curtain,
I tried to help my mother and her mother, and those who were there that day,
But inside, at that moment I was being torn up.
Perhaps I was too young to understand what was going on, though I believe I wasn’t,
Maybe the hurt and discomfort passed over my little body, not ready to set down,
Could it be that I felt my Grandfathers death as a child or an adult? Who knows?
All I can say is that, for a nine year old,
I have experienced something that will last a lifetime.

Gary Jones is a UK-based WordPress Engineer, code consultant, and father of extremely premature twins. Driven by a passion for excellence, he creates elegant WordPress plugins and theme solutions for clients, and provides services, including code audits, for other designers and developers. Gary is a key contributor to the Genesis Framework and has contributed to all except one major branch of WordPress Core since 3.3. He has contributed to many open source projects in the community, and is a co-host on the UK Genesis podcast. A former teacher in schools and prisons, Gary's goal is to educate WordPress professionals on how they can improve their code. His motto is knowledge is power.