This is a reference post for those Battrick managers using my Timetable-Helper, part of the Battrick-Helper spreadsheets.

It seems that the scripts that generate the fixtures list for First Class (FC) games in Battrick, “see” the leagues differently to how they are generated at the start of the season. In short – what we see at the front-end is different to what the back-end thinks it is.

There is only one FC fixtures pattern, and it is based on league position — however, the reset leagues do not show the correct positions!

Here’s how to work out what number you need to enter in the FC Position box on the Timetable-Helper.

Go to Club->Pavillion->FC League->Fixtures. Here’s a screenshot of my FC league fixtures: 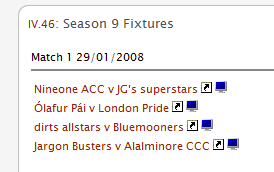 Now, map the teams on to this pattern:

So, my team, Jargon Busters is actually starting off 7th in the league, rather than 3rd as it shows on the league table. Consequently I would put “7” into the FC Position box, to get the correct Home/Away data in the spreadsheet.

This should then give the correct Home/Away data for the FC games:

The One Day (OD) leagues were generated correctly, so you can simply enter the league position as you see it into the OD Position box. Mine is position 5, as per the screenshot earlier.

Update: It seems that there was indeed a bug! The fixtures list for the FC games were generated against the OD standings (in the separate leagues of course) of the teams in your league, rather than the FC standings! This should be corrected for the start of next season, so there should be far less confusion!

To clarify: The teams in my league are starting from the following OD positions this season: 1, 1, 2, 2, 2, 5, 5, 8. As I was one of those’s 5th places, then my FC fixtures this year follow that of the 7th place team. I’m not quite sure what happens if there’s a tie between OD rankings.