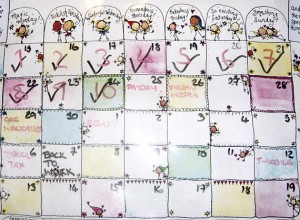 When asked to write a guest blog post for the venerable Mr Jones my initial thought was to write something witty and succinct. However upon realisation that being neither concise nor humorous are my greatest talents the following ramblings seem appropriate.

The majority of those who read this don’t know me and never will, I like that anonymity. There’s something about writing something out for the whole world to see that’s very therapeutic. The thought that someone might read this and find the slightest interest, enlightenment or inspiration from it makes me smile.

I’m going to write about accomplishment, progress, recovery. However you deem to express it for me they all boil down to the same basic principle. That principle to me is (if you’ll excuse my French) getting the f**k on with it. I mean, obviously it’s not that simple, so, let’s give some background here.  Wait for it, here comes the big confession:

This is something I’ve been told many a time that’s very difficult to say. In reality it’s not. It’s a simple matter of sentence structure and semantics. The obvious difference here is saying it and understanding the consequences, because the thing is the moment that I said those words out loud, it became a problem.

Let’s not forget the fact that the first time I said those words I was wearing a green and pink mini-dress, neon green stiletto heels and sitting cross legged on crisply laundered Sunlight sheets in Basingstoke and North Hants Hospital. The previous night I had washed down 40 aspirin with 75cl of vodka, panicked and called an ambulance. Earlier that evening I’d wandered around the streets dressed in only my night dress and aforementioned green stilettos having to be escorted back to my own house by a friendly neighbour. Despite this though, until I said those words the next morning, that behaviour was not out of the ordinary to me. It was just one of those things that everyone does sometimes? Aren’t we all a little crazy? Don’t we all enjoy the odd drink?

The point I have specifically always struggled with is where does the distinction between ‘enjoying a drink’ end and ‘having to drink’ begin.  The National Library of Medicine defines alcoholism as the following:

“A primary, chronic disease with genetic, psychosocial, and environmental factors influencing its development and manifestations. The disease is often progressive and fatal. It is characterized by impaired control over drinking, preoccupation with the drug alcohol, use of alcohol despite adverse consequences, and distortions in thinking, most notably denial. Each of these symptoms may be continuous or periodic.”

Now see, I can completely understand that the distinction lies at the point where control is lost, where there is a preoccupation with drinking, where it plays on your mind all day. Relating this back, I can see that despite my perception of myself that I was in control because:

and finally, and probably most importantly:

…these were actually highly contributing factors showing that I wasn’t in control. OK, so yes, as far as the outside world could see I was fine, I wasn’t a danger to others, I wasn’t about to slam my car into a pedestrian or go stand outside Liquid and pick fights with strangers, I turned up to work every day and worked to the best of my ability through constant hangovers, I did my laundry, cooked my meals, showered regularly, anything I could to convince myself that my consumption of alcohol was ‘normal’ and ‘moderate’.

But I digress. Back to, as I put it “getting the f**k on with it”. It’s a basic principle that I’ve struggled with for as long as I can remember. Something I suspect that everyone finds difficult on some level, whether it’s something as simple as getting out of bed or boiling an egg, the slightly more complicated tasks such as doing the ironing or working out how to use the inner join command in SQL, to the baffling concepts of completing a degree, learning  exactly how to use the | character in UNIX or writing a witty and succinct blog post.

Saying those words though, that was the force of action that made me put my principle into action, and over the last ten days of sobriety it’s a principle that I’ve applied to everything.  It may not be the most efficient or productive principle but so far it’s working, some examples below:

(I’ve omitted the f-word for politeness, feel free to add it in as you read those back to yourself)

The last one of those bullet points is the by far the hardest, and I know full well that at ten days it’s still early in the process. The thing is though, I’m actually doing it. Getting the F**k on with it and getting help. I’m achieving something, progressing and growing and for the first time in years I’m doing something for me. I’m talking to people, being honest and working through things, and if I can do it so can anyone, because you see, I suspect I’m a lot more ‘normal’ than I think I am. So tell me, what’s your confession? And what can you do about it?