No, I didn’t just write all those poems tonight; they were written between 1995 and 2006, although most were written around 2000/2001. It’s just that with the new blog, and with the old poetry pages being borked, I thought it would be just as easy to stick ’em here instead. 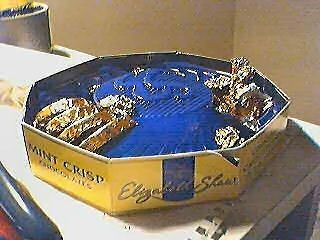 It has mean however that I’ve had no dinner or done the jobs I was supposed to get done. I have also munched my way through the best part of a packet of Elizabeth Shaw Mint Crisp Chocolates (think round After 8 mints) that I found loitering in the cupboard.